CAMDEN, NJ AND NEWARK, NJ – JULY 12, 2021 – Harris Blitzer Sports & Entertainment (HBSE) Co-Founders Josh Harris and David Blitzer announced today that Thaddeus “Tad” Brown has been named Chief Executive Officer. In his role as CEO, Brown will oversee all business and growth functions for the HBSE brand and its properties, including the Philadelphia 76ers, New Jersey Devils and Prudential Center. Brown begins with the organization on Tuesday, Aug. 3.

“We are thrilled to welcome Tad to the HBSE family,” said HBSE Co-Founder Josh Harris. “Tad is an exceptional leader in our industry, and one with a deep passion for innovation and community engagement. With nearly twenty years’ experience leading the Houston Rockets and Toyota Center, we are confident that he will bring a fresh energy and new ideas to our teams, organization and local communities.”

“Tad has an extensive track record of success in the sports and entertainment industry, and we are excited to have him on board to lead our elite management team for HBSE’s next chapter,” said Co-Founder David Blitzer. “With his experience and passion for growing businesses and global brands, he is poised to continue our organization’s path forward and reach new levels of achievement.”

Brown joins HBSE after nearly two decades with the Houston Rockets, Toyota Center and Clutch City Sports and Entertainment, 15 of which were spent as CEO. In his role in Houston, he was a member of the NBA’s Board of Governors, served as the representative to the Executive Committee, and served on the league’s Media Committee. Over his tenure, Brown helped position the Rockets as one of the NBA’s premier global franchises, as well as a cornerstone of the Houston community. The business thrived under his leadership, setting Toyota Center records for sellouts, attendance, total events, and customer satisfaction. Additionally, Houston hosted NBA All-Star Weekend in both 2006 and 2013, as Brown played a key role in making Toyota Center the first NBA building to have two All-Star Games over a seven-year period. His extensive knowledge of media rights helped fuel the Rockets growth, including the creation of the Houston Regional Sports Network in 2012, now established as AT&T SportsNet Southwest.

In 2017, Brown orchestrated the sale of the Rockets by Leslie Alexander to Tilman Fertitta for a then-NBA and global sports franchise record $2.2 billion.

In addition to guiding the business growth and success of the Rockets and Toyota Center, Brown led the organization’s strong community outreach and charitable endeavors. He was past President of the Houston Children’s Charities, served on the Board of the Greater Houston Partnership’s Opportunity Houston Committee and the Board of Central Houston, as well as the Boys & Girls Clubs of America.

Brown’s move to HBSE also reunites him with longtime friend and colleague, Daryl Morey, the 76ers President of Basketball Operations. During their time together in Houston from 2007-2020, the Rockets compiled a 640-400 (.615) record, the second-best of any NBA team, while becoming one of the NBA’s most successful franchises.

“I want to thank Josh Harris and David Blitzer for this incredible opportunity to lead HBSE in its next chapter,” Brown said. “This role not only allows me to work for innovators like Josh and David; it also allows me to work alongside some of the industry’s best talent that has been assembled across the HBSE organization. This is a world-class sports and entertainment organization that cares about the cities and fans it serves. My family and I are thrilled to begin our new journey and I’m eager to help guide HBSE to even greater heights.”

Prior to joining the Rockets, Brown was a Founder and President of Streetball Partners International. For more than a decade, he worked in partnership with NBC Sports and the NBA to build Streetball into the world’s largest global grassroots basketball property.

Brown is a graduate of Colgate University, where he was a four-year starter and three-year captain of the varsity basketball team. He and his wife, Janice, have four daughters. 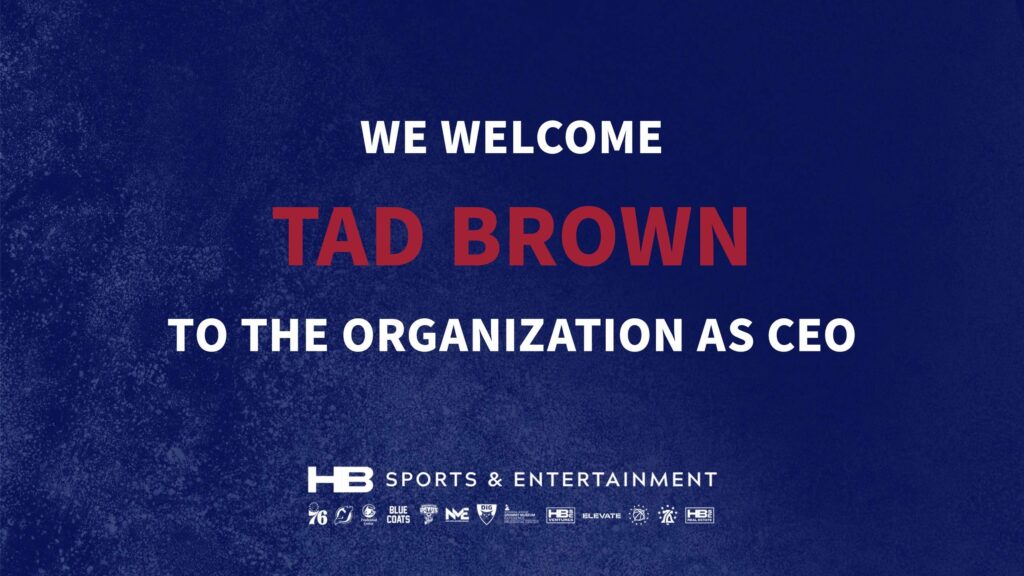